The National Center for Preservation Technology and Training (NCPTT) is pleased to present its Annual Report for the Fiscal Year 2008.

The Center develops and conducts seminars and workshops nationwide on topics like cemetery monument conservation and archeological prospection. NCPTT promotes excellence in preservation by providing historic preservation training and educational opportunities for professionals.

In 2008, NCPTT maintained a full-time staff of 14, awarded five grants totaling $215,415, produced 20 training and workshop events, produced 8 new research publications, and hosted 8 research interns. The following report outlines the accomplishments of NCPTT in fulfilling its mission to advance the application and science of technology to historic preservation.

Fiscal Year 2008 was a successful one for the A&C program. In the first half of the year, budget constraints demanded a more focused approach to the range of initiatives presented in prior board meetings. Several projects or events in planning phases were deferred. Major initiatives continued that were underway, many of which came to fruition. Program highlights include:

Bone Consolidation Techniques
Ms. Megan Smith, a graduate student in archaeological conservation at Texas A&M University, joined NCPTT from May to August to work on this project. Her efforts produced a thorough literature review of extant practices for treating and consolidating archaeological bone. She also outlined a research plan for comparing the efficacy of these techniques, and plans to devote her doctoral dissertation to the project. Smith will return in Summer 2009 to continue research.

XRF of Colonoware
The A&C and MRP programs have drafted a Cooperative Agreement with St. Eustatius Center for Archaeological Research (Dutch Antilles) and the College of William and Mary to investigate the utility of portable XRF for ceramic sourcing. St. Eustatius has agreed to provide access to an ideal control sample of low-fired earthenwares, as well as comparative material and samples from island clay sources. William and Mary provided the background case study on sourcing and Caribbean economics of the 18th century, via a master’s thesis project. NCPTT provided the XRF equipment and analytical expertise. An initial feasibility sample of 45 sherds has been identified.

Revised Research Priority
A Research Priority Committee of the PTT Board met in December 2007 to assess and revise several key research priorities. The archaeologically-focused priority implemented in 2006 has been revised. Originally the priority stated that NCPTT focused its grants program by courting proposals to “develop innovative techniques in dating, monitoring, analysis, and remote sensing of archeological sites and artifacts.” This has been revised to state: “investigate minimally invasive techniques to inventory and assess cultural resources.”

Colorimeter Development
Mr. Curtis Desselles, a graduate student in heritage resource management at Northwestern State University of Louisiana, joined NCPTT from May to August where he worked on multiple projects in concert with the MRP program. Desselless created a prototype colorimeter for under $50 that is capable of distinguishing hundreds of thousands of colors, making it an economical alternative to commercial models ranging in the tens of thousands of dollars.

Eddy Current Analyzer
Also in 2008, Desselles devised an instrument for under $50 that is capable of generating eddy currents used for the analysis of sub-corrosion metal surfaces. He currently is working with MRP to prepare a workshop on the topic for APT.

TRAINING
Disseminating information is an important component of NCPTT’s work. In FY08, the Archeology and Collections program presented the following training:

High Definition Documentation in Archaeology Webinar
NCPTT assisted the Kacyra Family Foundation’s CyArk Network and Texas Tech University with the dissemination of a six-hour webinar split over two days. The webinar, a first for NCPTT, focused on high definition documentation methods, focusing principally on 3D laser scanning, high dynamic range panoramic photography, and photogrammetry. Mesa Verde was the test case. Some 90 people from around the globe watched the webinar. 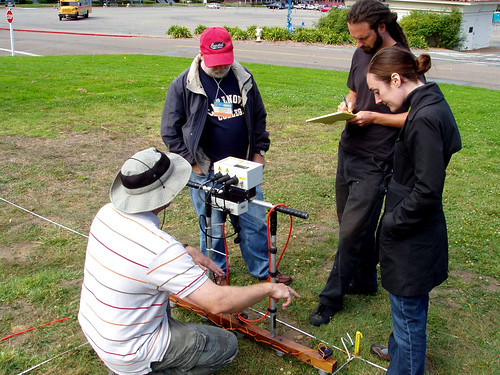 NCPTT completed an online geophysics tutorial from the 2007 class, which is now online. In 2008 the course shifted venues for the first time, moving to San Francisco where it was hosted from September 9-16. NCPTT partnered with the Presidio Trust to deliver its most successful training event to date in terms of both paying participants (n=17) and quantities of positive reviews. As in prior years, the course focused on traditional non-invasive geophysical technologies (GPR, gradiometry, conductivity, and resistivity). Field portable X-ray fluorescence was a new addition, and the course format also changed substantially. This year excavations were conducted in advance of the class courtesy of the Presidio Trust.

Remote Site Surveillance
Building off a workshop it hosted in 1998, in September, 2008, NCPTT convened 34 law enforcement agents and other stakeholders representing seven federal agencies, plus a tribal confederacy, the private sector, and academia. Over two days participants offered 19 presentations on archaeological surveillance best practices, field realities, and new technologies. The participants agreed to create an Archaeological Site Surveillance Working Group for the purpose of mutual support and information sharing. The United South and Eastern Tribes is currently considering a formal resolution in support of the group and its efforts.

Technology for Archaeological Interpretation
Due to budget constraints the planned 1-week workshop is being redesigned in a cutting edge medium: podcasts. NCPTT is hosting a series of podcasts on technologies of interpretation. Each podcast features a single technology and will be narrated by internationally recognized experts on that interpretive technique. Speakers who have agreed to participate at present include John Loomis (CyArk), who will speak on high definition documentation; Graeme Earl (Univ. of Southampton), who will discuss 3-D modeling; and Ruth Tringham (Univ. of California-Berkeley), who will present Second Life and multimedia approaches to interpretation.

Heritage Values: The Past in Contemporary Society

NCPTT provided critical funding for Hamline University and NPS’ Southeast Archaeological Center to develop an international preservation policy workshop which took place from November 15-17, 2007 at Cumberland Island National Seashore. Resulting conference sessions were held in March 2008 (SAA, Canada) and June 2008 (WAC, Ireland). Additionally, the SAA has agreed to formally recognize a new Heritage Values interest group based off of the workshop. Work continues to develop a website for the interest group through NCPTT, and to publish the proceedings of the workshop.

OUTREACH
Program visibility continues to improve, as evidenced by the surge in significant archaeological grant proposals witnessed in 2008. Outreach is one of the key ways in which visibility is achieved, and the A&C program engaged in a variety of outreach activities ranging from fielding public inquiries to conference participation to professional service. Some of the new outreach highlights include: